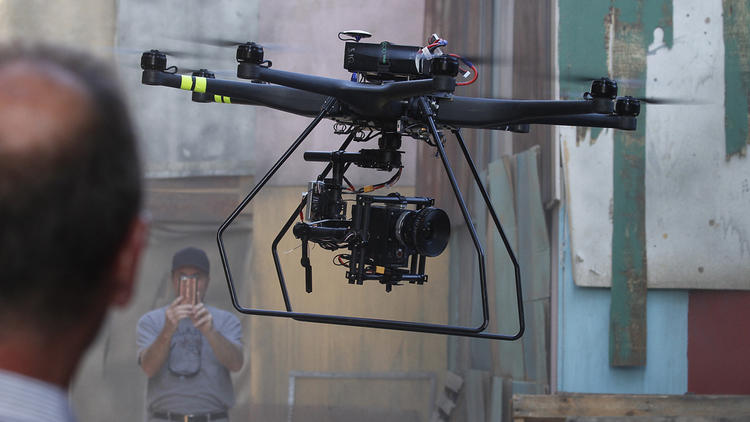 Drones have been providing new potential for creativity and success in the entertainment industry. Since the Federal Aviation Administration (FAA) has cleared the use of drones for commercial use under the proper permits, the entertainment industry is seeing many more being used to film shows, movies and commercials. Companies like Nike, Tesla and Chrysler have all been already using drones to film commercials (Verrier 2015). The potential drones have for creating success in the entertainment industry is becoming very beneficial for producers and the people funding the creation of the films and commercials because the cost and benefits. According to the LA Times, a typical helicopter crew costs around 25,000 dollars to operate for one day on a film set while the cost of the drone to get the same shots is only about 5,000 dollars (Verrier 2015). http://www.latimes.com/entertainment/envelope/cotown/la-et-ct-drones-hollywood-20151008-story.html. This is slowly becoming the preferred method of filming aerial shots for entertainment because the cost is so much less compared to using a traditional manned helicopter. Los Angeles has already issued about 60 permits to operate drones for commercial entertainment purposes. Not only are drones much more inexpensive to operate and film for the day, they are also allowed in many more locations and allowed to fly closer to the ground compared to manned helicopters. TV and movie producers are taking advantage of the close proximity drones are able to fly to actors to maximize the best possible shot, especially in action scenes.

Drones also eliminate much of the danger involved with flying manned helicopters over and around movie/t.v./commercial sets. The LA Times described how during 2013 three people were killed when a helicopter crashed in Acton, during the filming of a reality TV show for Discovery Channel. http://deadline.com/2013/02/three-killed-in-helicopter-crash-at-filming-location-for-tv-reality-show-426986/. The fact that drones are unmanned and much lighter than manned helicopters greatly reduces human danger when flying them for filming compared to operating a helicopter. The entertainment industry is going to definitely benefit, both economically and physically from the use of drones. Drones are also entering the art world and being used to create new expressive forms of dance routines. Pr. Tamás Vicsek and his team of creative dancers and drone flyers have recently filmed and made a dance routine that utilizes lighted drones and a few dancers interacting with them. http://dancingwithdrones.com/. This appears to be another pathway that the future of drones will most likely be taking.